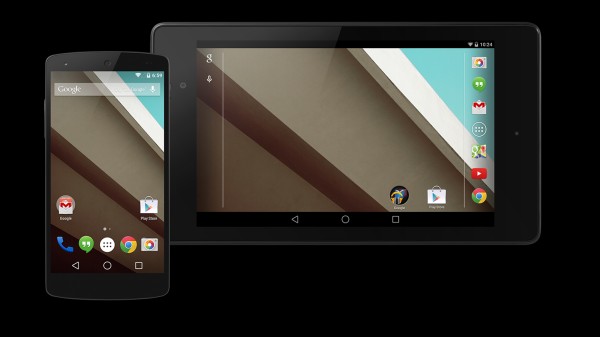 Android KitKat was launched in September, last year. After that we were all excited to know what will be the next update named and when will it be released. The wait got over when Google announced Android L at its Google I/O event in June. Android L is now in preview mode for developers but will soon be released to the public. So, lets take a look at some of the awesome and new features in Android L. They might force you migrate to Android OS.

It is still not sure whether the new update will be numbered as Android version 4.5 or 5.0. Still 4.5 looks to be more famous and in talks. Android operating systems are always named on a desert. We are not sure about its real name at the moment,

Many speculators are saying that it might be Android Lollipop. Some Indian people believe it to be a Android Ladoo. Updates are all about optimizations, new things and bug fixes. So, lets start exploring the severely cool features in Android L.

Material design is what Google is referring to its latest UI in Android L. It seems to be more cleaner and flat than its predecessor`s UI. The Roboto font can be used everywhere. New navigation buttons which include a triangle, Circle and a square. This is a very unique design altogether.

The elements on the screen can be given depth. There are shadows and light sources which do affect the user interface in a very positive way. You can get more details about this material design in the Google`s video:

Android L has a complete makeover. Even there will be a new lockscreen which will show you notifications. If you do not have any lock pattern assigned to your phone then you can swipe to unlock. If you swipe right to launch the dialer or left to launch the camera. 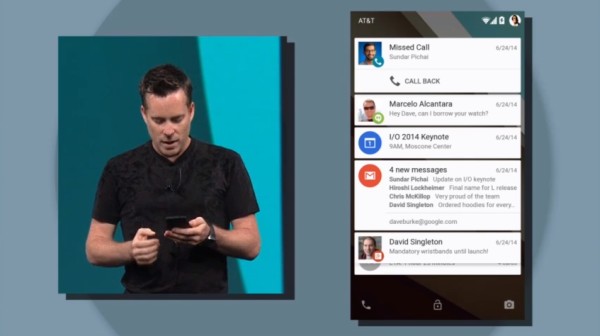 There will be no boring list of the new recent apps. In Android L they will be showcased in a Google Now card style layout. The open apps seem to flow and stacked and the user can swipe off to either side to close them. 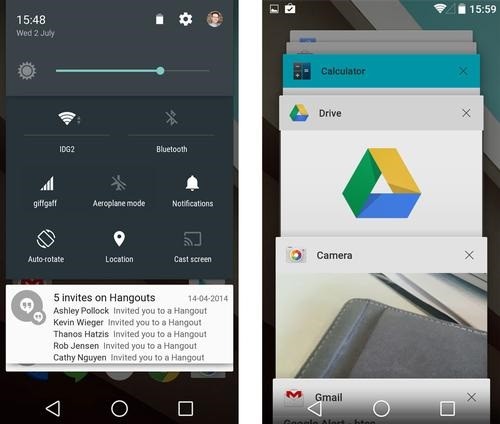 It opens in the same way like swipe from the top. The layout has been changed. If you want to access quick settings you can do so by swiping downwards than tapping on a button for it. A screen brightness control can be seen and a new “cast screen” icon is there for mirroring with a Chromecast.

As we know that security is a key feature for any user and Google has taken a further step. User can unlock the smartphone just by being physically near enough to the smartphone. Similar to an Android wear watch. This is a one of those new functions in Android L which has got us excited.

Many android users have to install an app to save their battery. But with Android L there comes a battery saving mode. Nexus 5 will get extra 90 minutes of power because of this battery mode, said Google. More detailed battery section in the settings menu.

While using chrome, the opened web apps will be shown like native apps and switching between them will be much more easier. We do believe that Google has kept a lot of things in mind with perspective of the User Experience in this OS update.

Android L will support 64-bit processors and will also support the ART software library. Google says that it is twice as fast as Dalvik. So we can expect the new OS to perform faster.

Everyone is trying to stay active and fit. In the world of activity trackers, Google thought that a Google Fit feature is very much essential in Android L. It does monitor physical activity and food intake and health indicators such as heart rate and breathing.

Spice has introduced two new smartphones. These phones are available on an online shopping portal. Spice Smart Flo Ivory 2 Mi-423 is priced INR 4,299. Both these phones are 2G….