Everybody is showcasing its latest offering at the MWC 2014. Today we saw Nokia announce the much anticipated Nokia X and Sony announced Xperia Z2 and M2 phones so how can Qualcomm- the manufacturer of the heart of the smartphones stay silent? In its answer to MediaTek MT6732 quad-core SoC Qualcomm announced Snapdragon 610, 615 and 801 chipsets.

The Snapdragon 801 MSM8974AC is the successor to the MSM8974AA and even has same components. Actually it has higher clocked CPU, GPU and memory. 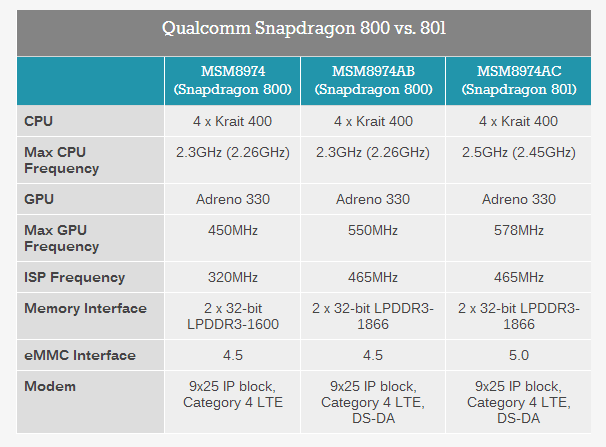 The CPU frequency is upped by 8.4%, GPU by 28.4% and memory bandwidth is increased by 16.6%. Frankly speaking these difference might not bring any noticeable performance difference for the end users but they are good for bench-marketing.

The Snapdragon 801 will top the benchmarks charts till the 805 arrives.

It also supports eMMC 5.0 standard making it compatible with the latest and fastest flash storages such as iNAND extreme from SanDisk.

Snapdragon 615 vs 610 vs 410 Specifications Comparison 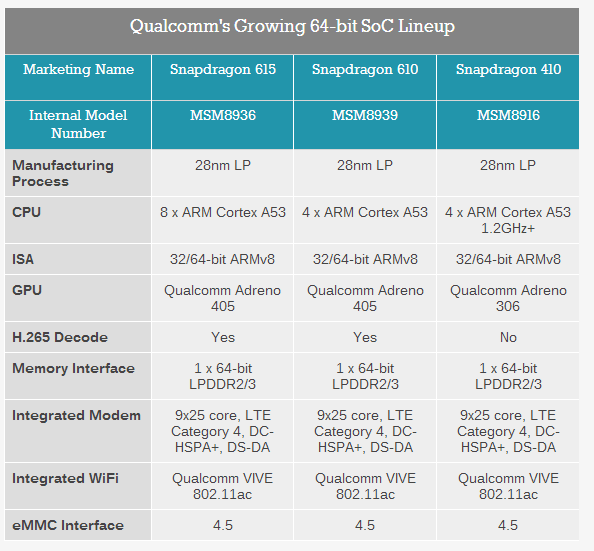 The Snapdragon 610 MSM 8939 has a quad-core CPU based on ARMv8 instructions and Cortex-A53 cores.  Snapdragon 615 on the other hand is an octa-core beast based on the same instruction set and core architecture as the Snapdragon 610. Both of these chipsets have Adreno 405 to take care of the graphics needs.

Snapdragon 615 aims to compete with MediaTek MT6595 In the emerging markets.

I am eagerly waiting to get my hands on devices based on MediaTek 6595 and Snapdragon 615 so I can pit them against each other.

Other details about these chipsets have not been made public at the moment. We will update you as soon as we have more info.

Now you must be noticing that from past few days the news is coming only from Micromax. They seem to be very active and the launching of products seems to…