The camera lineup of the Samsung Galaxy S series, Samsung Galaxy S5 Zoom has shown up on GFXBench database. SM-C115 is the name of the device with a 19MP rear cam and a 4.8 inch HD display.

It is not official but we suspect it to be the upcoming Samsung Galaxy S5 Zoom. It has a front 2MP shooter which is also capable of shooting full-HD videos. The Galaxy S4 Zoom had a 4.3 inch qHD (540×960 px) display having a 16MP camera at the back. To tell you frankly, the S4 Zoom failed to win the hearts of the photography freaks across the globe.

The S5 Zoom not only features a bigger and sharper display but also has more RAM and a hexa-core Exynos chip. The leaked information also reveals that it has four Cortex-A7 cores clocked at 1.3 GHz each. It doesn’t say anything about the other two Cortex-A15 cores but we know that they are clocked at 1.7GHz each in Exynos 5260 SoC. 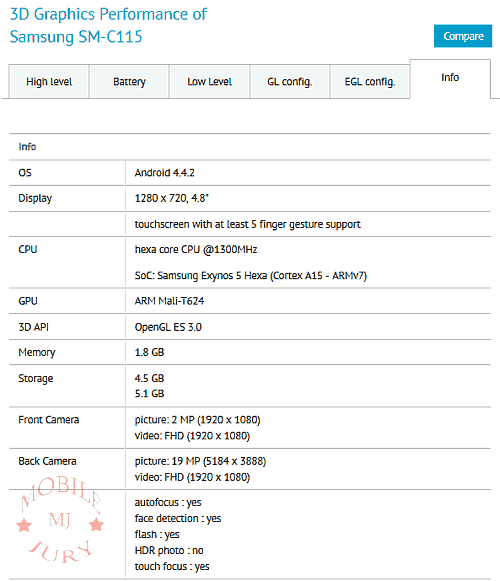 The fact that the Galaxy S5 Zoom’s info appeared at GFXBench gives us a clear signal that its official launch is just around the corner. We’ll update you with more info as it becomes available.