Mumbai, 15th May: Sansui launched a beautiful Curve Ultra HD TV with a 4K resolution along with some other models from their TV segment. The launch was led by Mr. Amitabh Tiwari, COO, Sansui with the presence of Kolkata Knight Riders team players- G Gambhir, Y Pathan & Shakib Al Hasan.

The Sansui Curve 4K Ultra HD LED TV is equipped with wider viewing angles as compared to a flat LED TV. The viewing angles (when tested) were almost brilliant at 175 degrees off the edge. The 4K resolution ensures amazing picture quality. 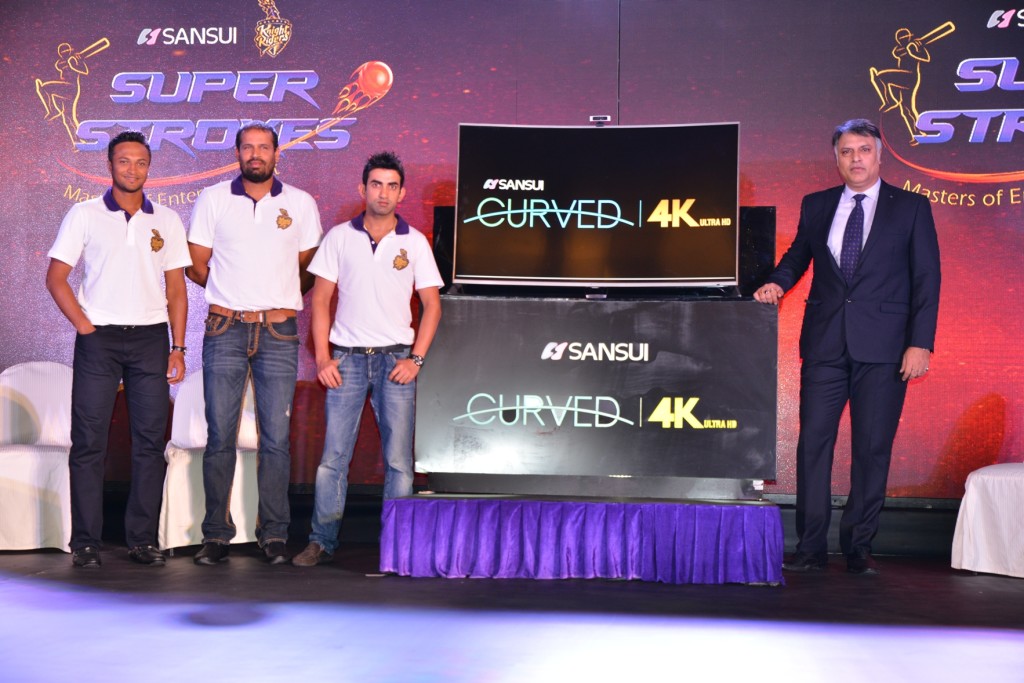 This Curve TV has a 55 inch (140cms) Ultra HD screen. It also has in-built 2D to 3D conversion. This Smart TV supports Wi-Fi and runs on Android 4.2 OS thus supporting Browsing through the TV. It also has 3 USB ports 1 USB (4K) port and 3 HDMI ports.

Other products included a flat 4K Ultra HD TV in 2 screen size variants. They have a resolution of 3840 x 2160 pixels on the IPS display. It also comes with Android  OS for browsing through App store and YouTube.

Sansui launched a special CONNECT series at the event. The connect series has an in-built D2H System with HD Transmission due to which you can get rid of the Set Top Boxes that occupy extra space. Connect series has TVs with Full HD screen in various sizes.

Fourth attraction was the Smart TV series. As the name suggests, it enables Internet access and App Store on your TV due to the Android Operating System.

Sansui plans to invest Rs. 80 crores in advertisement for these new series launched in India. The products will be available across thousands of its dealers across India as well as the multi-brand outlets. Sansui estimates to double its market share this year.

The Samsung Galaxy Note 2 needs no introduction. It became the undisputed ruler of the phablet world right after it was launched. It does all the tasks you want done…