Nokia X has finally been launched in India with a price tag of ₹ 8,599 only. It runs on custom Android 4.1 OS called as Nokia X platform. Nokia claims that about 75% of Play Store apps will run on Nokia X. 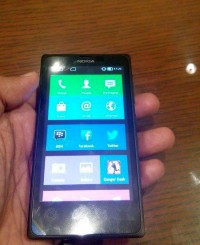 The Nokia X press event took place in Mumbai today and we were there to cover it for you.

Before you turn the display ON, the Nokia X will look like an Asha series device to you. It has a poly-carbonate body flanking hardware buttons on its left side.

The UI is a mix of android and windows phone 8 OS. The tile UI is tailor made by Nokia for making the phone stand out among the crowd. It not only looks different but also incorporates fast lane feature for multi-tasking.

It only has 150MB of free RAM out of 400 MB and hence is not good for multi-tasking. The apps open up quickly and the UI is also smooth to operate but it’s not what we call silky smooth.

We were expecting the UI to be extremely smooth as it runs on a stripped out Android OS but it is not.

The phone also has a mediocre 3MP camera which is kind of low for its asking price.

The Nokia X is definitely not what people were expecting it to be. It could have been better but don’t worry yet. This is an entry level device from the Nokia X series and we expect the upcoming Nokia X+ and XL to be way better than the X.

Based on our first impression we can say that the Nokia X will not give a tough competition to the other branded phones in its price segment. They need not worry FOR NOW…

Full review of Nokia X is in the works and is coming soon.

Sony is known for making beautiful phones with the latest technology but their smartphone sales is still nowhere close to the Samsung Galaxy Series. Reason #1 is the high price tag…