When will I see Android on a Nokia device? For me, this has been one of the most asked questions since half a decade. Finally I have an answer for the question. That day has come- 10th March 2013; the India launch for Nokia X after the Global launch at MWC 2014. I am at the launch event held @Trident, BKC, Mumbai. 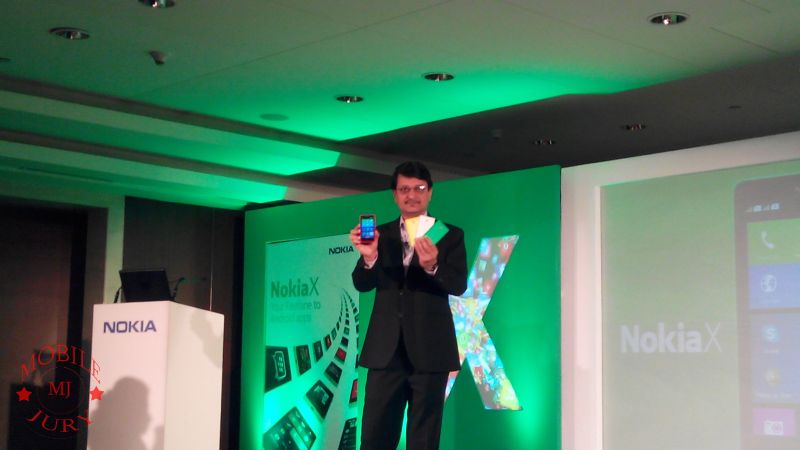 Expectations were at the top of the peak with Nokia-Android combination but somewhere it failed to win hearts.

Why did Nokia-Android combo, for Nokia X, not turn out to be a huge hit? Check out the Nokia X Review for full coverage.

Nokia X gets the famous Lumia looks & design as we had expected.The front is black & the colorful backpanel has 6 options to choose from.

Nokia devices have been known for their sturdiness. Nokia X follows the legacy.

Nokia X is a very rugged phone. So all those Android users who cry on the poor build quality of their devices, here is the Nokia X.

Again the back panel gets the same plastic as the other Lumia’s. Back panel covers the edges of the phone.

Sides: Covered with Back panel.

The front shows the 4” display with manufacturer logo & earpiece on the top. It has only 1 capacitive touch button below the display. This reminds me of the Asha series phones.

The 10.4mm phone weighs around 128.6grams. The rubber feel on the back panel gives a very good grip on the phone.

Overall, Nokia X has no upgrade in design. It has inherited all the aspects from the Lumia & the Asha series.

ii. User Interface: A Mixture of all

Nokia X is the first Android phone which gets a tiled home screen out of the box, very similar to Lumia. It runs on Nokia X software platform 1.0 which runs on Android 4.1.2 (the older version of JellyBean).

You do not have different screens for Menu & Home as we see in majority of the Android devices. Everything is loaded on to a single screen. Long pressing the back button will land you on this tiled home screen.

Next to the home screen is the much spoken, Nokia’s Fast Lane. Fast Lane will show you a list of most recently visited apps. You can directly access those apps from this fast lane.

Fast Lane acts similar to the multi-tasking feature for Android devices. Under-developed version of this fast lane is seen in Asha series smartphones.

Key Note: Fast Lane is fully customizable to allow or deny apps to show up.

You can swipe right from home screen to access the fast lane.

The top notification drawer does not drop 100% with redundant space below the expected notifications. It is denoted by 3 small lines. (Check the screenshots)

Settings are similar to that in Android rather that the unorganized style in Lumia.

Extra options for various functionalities in apps could be accessed from the drawer present at the bottom of the screen. The bottom drawer is denoted by 2 small lines.

The volume level indicator looks insignificant & pathetic, like a thick line drawn on the top.

The UI also inherited some more features from Lumia like- double tap to wake screen, glance screen, etc. There is not much work done on the transitions & animations in the UI.

Overall, this Nokia X platform gets mixed UI from Android, Lumia as well as Asha.

X says NO to AMOLED & IPS screen and sticks with TFT LCD.

It has pixel density of 233.24 ppi. The screen specs are exactly similar to the Lumia 525 and Lumia 520 except the presence of an IPS display.

The display is not very crisp, but the contrast is adjusted adequately to improve readability.

Surprisingly, the X misses the light sensor; hence auto adjustment of screen brightness is not possible. The front of the phone takes smudges very easily.

I couldn’t take the phone in sun to test its sunlight legibility but the screen is very reflective even for indoor lights. 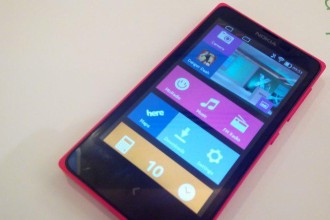 Single Handed: Typing in portrait mode is average due to low screen width. Adequate height of the buttons helps us in reducing the miss-typed letters.

The auto rotation feature does not work on the keyboard layout. So you cannot get the keyboard to work in Landscape mode. Disappointing!

Browsing with a 4 inch WVGA phone is at par with the average screen quality phones. It comes with Nokia browser as the default browser. And yes it supports your favourite browsers too.

Supports other Browsers too.

Unlike Windows, you can enjoy Chrome or Opera or other browsers of your choice.

Pinch to zoom works only for sites which are not mobile responsive.

Nokia X has high audio levels adequate for it to be audible at crowded places.

Speakers are placed at the bottom back side & are usually left out from being occluded by your hands.

The default music player is good. It supports all the standard music player functions. Unlike Windows, you can use tap to seek feature.

Nokia X plays 480p videos smoothly.The 720p and 1080p video playback is troubled by too many lags. Again, a disappointment from the device.

It does not support flv format and it lags in mkv, 480p video play. Overall, the UI of the video player reminds me of default player in the Android.

Yes! We have a File manager unlike that in Windows Lumia phones. 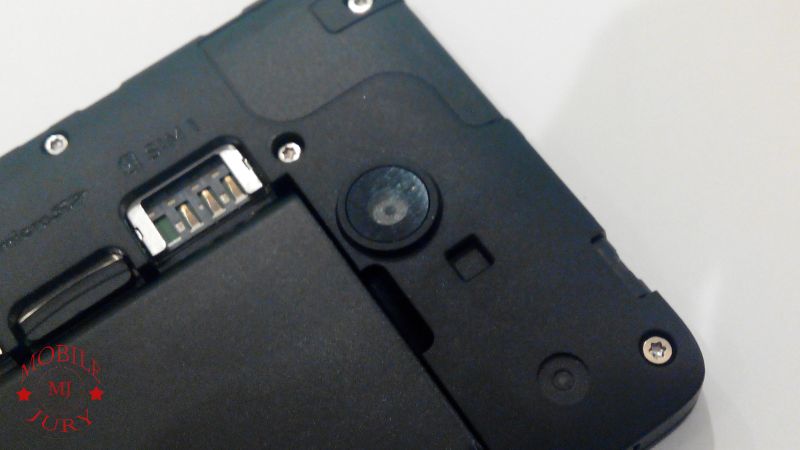 Nokia X sports a 3MP fixed-focus rear camera without LED flash. The camera mega pixel number is low at this price. Of course you expect an 8MP or atleast 5MP shooter at this price.

You cannot take screenshots in the camera screen. Interestingly, it receives a slider for zooming in. The overall layout could be very closely related to that found in Android devices.

The picture quality is up to the mark for a 3MP shooter. Color representation & sharpness is good.

The camera captures 480p videos at 15fps. The video recording lags; as expected from a 3MP camera.

The missing front camera at price of 8k+ pinches the pockets.

Multi-tasking is not easy with this device. You cannot switch back to recently used apps from the current app being used. You have to go to fast lane to reach recent used apps.

Games like Fruit Ninja worked smoothly on the device.

Power users should refrain from multi-tasking on this phone. 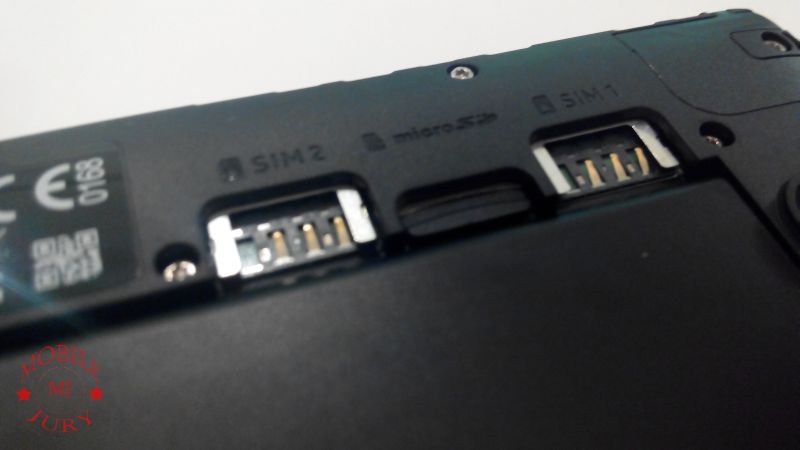 Battery did not heat during the entire process of testing. We couldn’t test battery drain time & charge time. 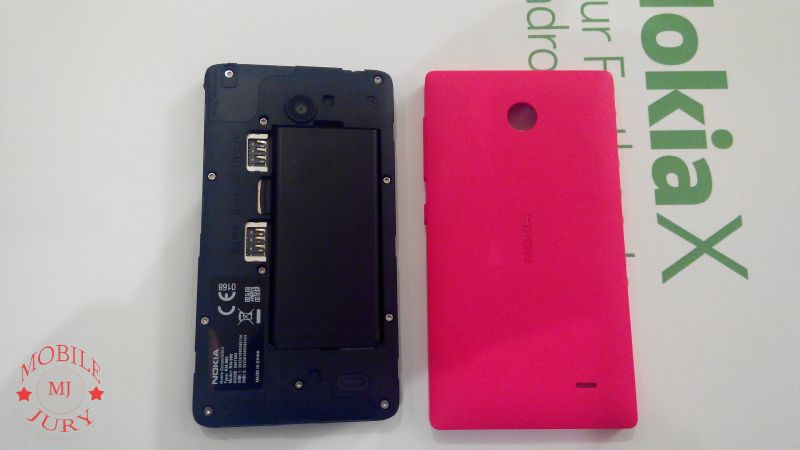 Nokia X turns out to be too less over the expectations. It has 1GHz dual-core processor with low RAM which adds to its distress. Below average camera & display makes the phone overvalued. Lag in HD videos & some minor tweaks that heap up the misery.

But there are some good thoughts. The UI is very good which will bring you closer to the Lumia experience. You get access to the Microsoft services. The best of all: a very sturdy phone for rough usage.

With the Nokia brand value adding up to the actual price value of Nokia X; it may not win hearts at INR 8,599.

It may capture the Entry-level Android users market, but it will Fail to BOOM according to its BLAST.