Samsung Galaxy Grand Duos, the much awaited 5 inch dual-SIM giant from Samsung, was launched at the start of the year 2013. The phone sports a huge display with a very low resolution. It has a dual-core 1.2GHz Cortex-A9 processor coupled with 1GB RAM. The smartphone is available around the price of INR 19,000. Check out if it is worth the price. 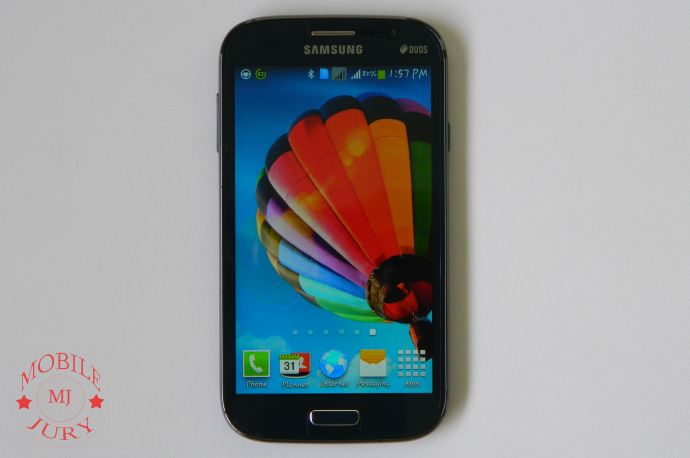 Samsung Galaxy Grand Duos was designed with the USP of a larger display phone. The phone is huge in size. It could be called as the bigger version of SIII or the smaller version of Note II.

The phone is surrounded by the chrome plated bezel which starts wearing off soon. The glossy back panel is made up of cheap plastic. The back is tapered towards the edges which gives a better grip to device.

The 9.6mm thick phone is bulky weighing 162g. The upper part of the front has proximity sensor, light sensor, earpiece & front camera. Volume rocker lies to the left & power button on the right side of the phone.

The back panel covers the rear camera with speaker & LED flash on either side. The phone lacks secondary mic used for noise cancellation. The top of the phone covers the audio jack while the bottom has USB port & the mic. SIM 2 is hot swappable but not the SD card.

Samsung Galaxy Grand Duos is dumped with the TouchWiz 2.0 UI over the Android 4.1.2 JellyBean.  The home screen has two modes- Basic & Easy mode.

Samsung’s additions to the phone- Smart Stay, Blocking Mode & Motion- Smart Alert, Shake to Update, Turn over to Mute/Pause. Samsung has tried to give features as good as Galaxy S3.

The Galaxy Grand Duos sports a 5 inch LCD Capacitive touchscreen. The resolution is as low as 480×800 pixels giving a pixel density of ~187ppi (one of the lowest in Galaxy devices).

This poor resolution is one of the major drawbacks of this 19 GRAND device. Samsung’s saturated display overshadows this low resolution to some extent.

Screen is very reflective so the light sensor plays an important role to adjust the brightness of the screen. The corners of the screen cannot be reached using single hand. Thanks to the single handed operation for texting, dialling & unlocking.

Overall the display is not very bad but at this price point you expect something better.

The Swipe to Call/Message feature in the phonebook & log is interesting. Dialpad is huge & again it can be converted to a single handed version as stated above.

Samsung also adds Chrome browser to its Menu. The overall browsing experience was expected to be good due to screen size; but it becomes average due to the low screen resolution.

Samsung Galaxy Grand Duos has 8MP AF camera with LED flash shooting pictures with a resolution of 3264×2448 pixels. Auto-focus is not very responsive and there are some delays while changing the focus from point to the other. The bezel around the camera wears off soon.

The user interface is user friendly; you will get all the options under one click. Colors are more towards the natural side, there is no saturation of the colors in the images.

Sharpness is preserved upto 2x zoom. After that, don’t expect sharp photos. You can use the Volume Rocker or the pinch-to-zoom to zoom in & out. There is also a slider given on the screen to zoom.

The phone lacks HDR mode. Panorama mode is good in colour representation & restoring details. Flash intensity is good for close proximity but don’t expect it to be very powerful for long range requirements.

Auto-focus gets sluggish during the low-light imaging & the noise levels are extremely high. But you will observe good imaging noise cancellation in camcorder mode which is surprising.

The phone lacks secondary mic, so don’t expect it to filter unwanted sound. If you are recording videos in low-light, then the flash turns on automatically..

The audio levels of Grand Duos are (surprisingly) much better than Galaxy Core or Grand Quattro. It is comparable to Note II or the Galaxy S4.

The speaker is placed besides the rear camera that avoids hindrance while holding the phone. The stock music player has standard options like shuffle, repeat, equalizer etc.

The Music Player also has a feature known as Music Square. It classifies each song into Passionate, Exciting, Calm & Joyful depending upon the mood of the song. It requires a minimum of 25 songs to start up.

The Video Player has pop-up play feature that lets you watch video while performing other tasks on the screen. You can also adjust its size but you cannot adjust its transparency as in LG Optimus G Pro.

The phone does not perform as expected. We encountered minor lags many times. While testing the phone for multi-tasking, the phone started behaving sluggish immediately after playing games.

The browser, camera as well as the contacts takes long to open up. The multi-tasking test was below the expectations for this INR 19k smartphone.

The vibration intensity & the pattern could be customized easily. Ringtone is very loud & the vibrations are also intense.

You can add up your ringtones from the memory or also create vibration patterns as shown in the screenshots below. The phone misses the LED indicator.

What it misses- USB OTG, HDMI and NFC.

Grand Duos includes a 2100mAh Li-Ion battery that is assured to last a day long. But with the average usage of calling, whatsapp, browser, 2G/3G, Wi-Fi & Music play the battery drains in less than half a day.

The phone gets heated up while playing games or using camera for longer duration. This heat is felt around the upper back portion around the camera & the speaker. Also, using both SIMs drains up the battery a lot faster than using single SIM.

Samsung Galaxy Grand Duos is a 5 inch phone that comes with a price tag of around 19,000 INR. The phone performs poor & the screen resolution is also below the average mark.

As usual there is no innovation in the design. The camera of the phone is good but the heating again takes the show away.

The only reason to buy the phone would be a 5-inch dual-SIM phone with an average performance. I would advise you to go for its alternatives.

HTC Butterfly S, flagship model of HTC has made it to the online stores in India. People are very excited about this phone as it features the same ultra-pixel camera…