Sony launched the successor of Xperia Z last week with many common factors but some good improvements. The Sony Xperia Z1 popped out with the similar omni-balance design & the water-resistant property as that in Z.

The flagship device is tossed with a hefty price tag of Rs. 42,000 with some great features you would like to boast. It has 20.7MP rear camera that will take your photography experience to new heights. Xperia Z1 sports a 2.2GHz quad-core Krait 400 processor coupled with 2GB RAM & Adreno 330 GPU. 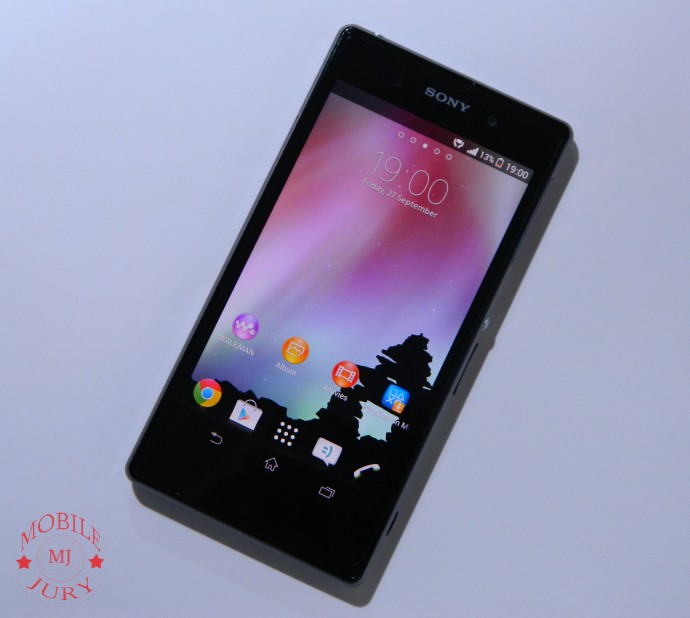 The phone is surrounded by curvy aluminium bezel which gives it much better look than Xperia Z. The front & back are again made up of glass which, the manufacturer claims, are supposed to be scratch-resistant as well as shatter-proof.

The glossy front as well as back takes up fingerprints very easily, so you’ll always need to keep a clean cloth handy. These faces are so reflective that you can also use the glass surfaces as mirror when you are in need.

The glass-made screen makes this phone least sturdy as you may end cracking it up after few drops. So beware if you have a kid at home who fidgets with your phone or if you are not a very cautious user.

Z1 is 5.68 inches in height. The size of the phone is outsized as compared to the screen size, mainly due to the space below screen. The capacitive buttons are taken onto the screen rather than being below the screen.

The phone weighs around 169grams with the thickness of 8.5mm. The rounded edge gives Z1 a better grip. All the hardware buttons are on the right side of the phone. This makes the device to be best suitable for a righty person (But lefty people will need some self-adjustments).

Finally we have a dedicated Camera Hardware Button. Thanks Sony!

Sony Xperia Z1 runs Android 4.2.2 JellyBean with Sony’s customized UI. There is not much difference in the user interface than the Xperia Z. There is a variety of themes available with the device.

There were no LAGS in the UI. Overall, the operations were very smooth. The transitions & animations are good, but could have been made better.

Xperia Z1 brags a 5” Full HD screen with pixel density of 440.6ppi. The screen is scratch-resistant but not shatter-proof as claimed by Sony. So be cautious.

Xperia Z1 is FRAGILE due to the Glass make-up.

The display looks gorgeous. During full HD video, it feels as if it uses each & every pixel of those ~440ppi screen. The Triluminos display with X-Reality image processing engine does all the work.

I am in Love with the Display.

The auto-brightness feature couldn’t be accessed from the notification panel. You’ll have to hunt it down from Settings>Display>Brightness.

Reflectivity of the screen is as good as a mirror so it would be advised to use the auto-brightness feature. The screen takes smudges easily so don’t forget to inspect your hands every time you use the phone.

I like Sony’s Keyboard & the user experience around it. Typing in portrait mode was fluent because of the Swipe feature inbuilt.

There are small personalization options with the keyboard. The emoticons are similar to those you find in other Xperia devices. There is a magnifier that pops out every time you want to change the location of the cursor. I like that.

Writing about the browsing experience would be like reviewing the Chrome browser. Sony did not give any of those stock Android browsers in Z1; it has Google’s Chrome browser. 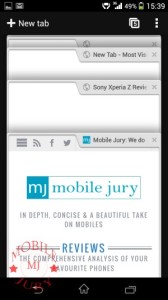 Camera: The best from SONY

Sony improved their rear camera from a 12.78MP in Xperia Z to a 20.7MP in Z1. It is accompanied by the BIONZ image processing engine & Exmor RS sensor. It shot pictures with a resolution of 5248×3936 pixels with a much better AF & LED Flash.

I liked the UI of the camera. The camera is as rich in features as that in Xperia Z. The Superior Auto feature detects the scene automatically. The colour representation & sharpness of the images are very good.

The Auto-focus in Z1 has a bunch of options like- Single AF, Multi AF, Face Detection, Touch Focus & Object Tracking. Z1 has 8x zoom but the images don’t restore sharpness after 3x zoom. The front camera is 2.1MP which shoots images with a resolution of 1920×1080 pixels.

Video recording is fun with Xperia Z1. The Auto focus is very quick & there is no lag on the screen. But the video quality becomes grainy as you zoom in.

Multimedia: With Some Improvements

Sony has come up with some improvements in the inheritor. Z1 has got a larger speaker with much better audio quality. The audio quality is not as expected from Sony, but it is above average. There was a good clarity in the audio.

The music player is named as Walkman after the famous Walkman series from Sony. It has a visualizer option which shows some animations according to the song. This should be an intriguing feature especially if you are fond of some special effect with your music.

The placement of speakers is good & sensible at the bottom side of the phone. It is almost impossible to fully obstruct the speaker with your hand while listening to music or watching some videos.

The gallery in the device is named as Albums. It has got nice pinch to zoom in thumbnail view. Sorting & hiding options are absent from the albums.

The movie watching experience in the Xperia Z1 gets a huge support from one of the best displays in smartphones. The thumbnail view shows a preview of the last played video.

The video player has video info options & the tap to seek has no delays. The equaliser in video player is similar to that in music player. During the Full HD (1080p) video, it seems all those pixels are at work, giving a great experience.

Hardware Performance: Is it the Best Performer?

Sony Xperia Z1 is leagues ahead of its predecessor, the Xperia Z. It is powered by a 2.2GHz quad-core Krait 400 processor based on Qualcomm MSM8974 Snapdragon 800 chipset, the latest from Snapdragon. The Adreno 330 GPU & 2GB RAM are also added to the specs.

As far as my 2 days encounter with Z1 goes, I experienced no delays & lags in the phone at all. The performance of the phone is undoubtedly one of the best you expect from a smartphone.

The ringtone is loud & clear with a pre-defined heap of options to be selected from. I tried the phone in the right pocket of my jeans with the speaker faced down in a semi-crowded place- the ringtone did not disappoint me at all.

Unlike Samsung, there is no customisation in selecting Vibration types & intensity. The notification LED is somewhat lost in the Z1. The LED is in the earpiece right at the top of the screen.

The Li-Ion Battery is non-removable having capacity of 3000mAh. You might be under the impression that a battery of such capacity might be sufficient to power the phone for a full day on normal usage but it doesn’t. The phone also gets heated up within no time irrespective of the work you’re doing.

Sony Xperia Z1 shows great performance. It looks beautiful & the display technology would be loved by all. The camera is one of the best available in today’s Smartphones.

The audio quality is not the best expected from Sony but still they have managed to make it better than Xperia Z. The glass body looks good but you have to be cautious while using it. The battery backup is low & the heating problem is a big problem in the phone.

If you can cope up with the heating problem, then you can surely buy this phone.

Spice mobile has announced a very interesting online campaign. It is called “Spice Milaye Sapnon Se”. This is an online contest where people will be able to share their dreams….