Moto G, one of the highly coveted mid-range phone of the year 2014 was launched just today in India with flipkart.com as its exclusive partner. While we still haven’t got our hands on the Moto G, our readers were waiting for Moto G vs Micromax Canvas HD A116 showdown. 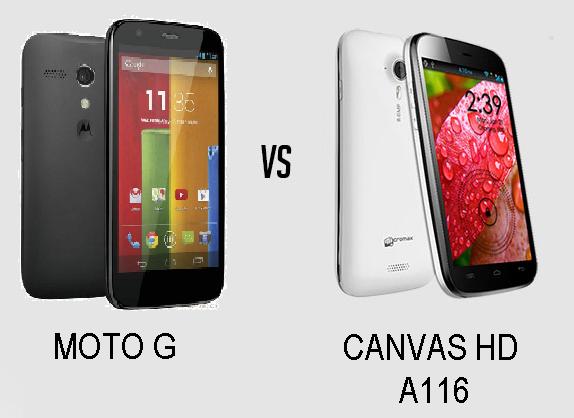 Like always we will give Moto G our full review treatment but that will take some time.

This comparison is for those who are in a hurry and want to buy a phone right now. Canvas HD A116 is one of the best phones that you can get below ₹14k and same can be said about the Moto G.

Both of these phones run on 1.2GHz quad-core Cortex-A7 processor and have 1 GB RAM for multi-tasking.

The Mediatek chipset in Canvas HD is, as we tested in a lot of phones- an overall good performer. You can play games like Temple Run Oz and Frontline Commando without facing any lags.

On the other hand the Snapdragon 8×26 chipset in the Moto G coupled with android KitKat performs very well in benchmark tests. You know that we don’t believe in benchmarks)

The benchmark results of Moto G are very impressive for its price tag. You know that we don’t trust in benchmark scores but they can be used to take a rough guess about any gadget.

The MT6589 scores about 13.5k (avg) and Snapdragon 8×26 chipset in Moto G scores 17k approx. in AnTuTu benchmark. I know that benchmark scores can be optimized but Motorola, Google and Apple don’t follow such mal-practices of benchmark optimizations.

Moto G has a clear lead of 26% over the Canvas HD if AnTuTu is to be believed.

We also know that Micromax Canvas HD doesn’t come skinned with too many UI effects and transitions. Moto G runs on almost vanilla flavour of android kitkat. You might think that it is not fair to compare a phone running on 4.2.1 JB with some phone on android 4.4.2. I agree with you on this.

I tried to ignore the extra points gained by Moto G for running on the latest OS but still 26% has got to account for something. This clearly indicates that the 8×26 chipset is better than the MT6589 from MediaTek. We can’t tell you the exact difference in performance as of now but things will get clear in due course of time.

Unlike the chipset it wouldn’t be reasonable to compare the cameras of both the phones just by looking at photos of different objects taken by them at different places and different times.

I am still including the camera samples of both of these phones so that you can check what their clarity is like.

Most of the people hardly use their cell phone for hard-core photography and if you are one of them then Moto G might suits your needs very well.

Micromax Canvas HD is not a bad phone as it does almost every task that you throw at it without much delays/lags. In fact, it was the best phone in its price segment when it was launched.

Moto G on the other hand comes with an entry level quad-core chipset (8×26) from Qualcomm which is somewhat better than the MT6589.  I believe that Motorola will also provide at least one more android upgrade to Moto G.

And one more thing, buy Moto G if and only if you can live with only 12.92 GB of free space.

I’m well aware that Micromax also announced KitKat update for many of its phones but there is still no official information available about the rollout date for the update.

Do share your opinions and thoughts about this article in the comments.