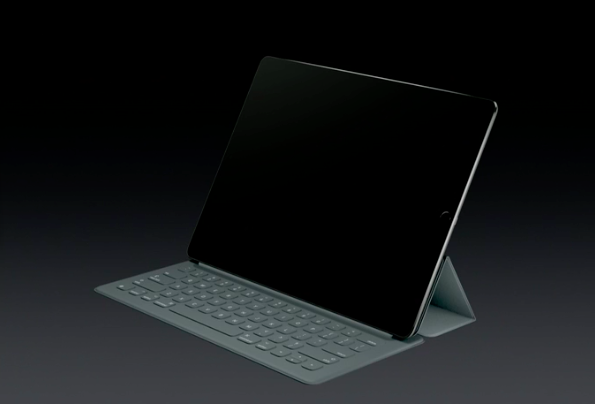 Apple’s CEO Tim Cook started off the much awaited Apple Event stating Monster Announcements were coming up. Indeed, Apple did announce new fresh additions and upgrades to their existing lineup of their immensely successful products.

Apple briefed on their latest addition, The Apple Watch to say how well it has been doing. Also, it showcased new capabilities in the Apple Watch OS 2 with some productive medical and health-care apps like Airstrip. Also, new Watch Bands will be launched to make the Apple Watch more customizable and trendy. Apple Watch’s latest Operating System ‘Watch OS 2’ will be available on September 16.

Then to the Awaited iPad Upgrades, Apple announced ‘Biggest News in iPad since the 1st Edition of the iPad’. The iPad Pro was the latest variant of the tremendously successful iPad Line Up. Dubbed by many as the Laptop or Macbook Killer, This iPad is a Beast. 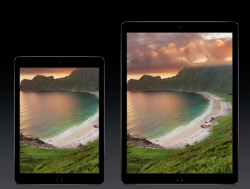 How the iPad Pro sizes up against the iPad Air 2.

This iPad is Huge, with a 12.9 Inch Diagonal Display, it is way larger than the iPad Air which was 9.7 Inch in comparison. This iPad is meant to provide truly Desktop Class performance for with a Twice as Faster A9X Chip which is powers the Device. 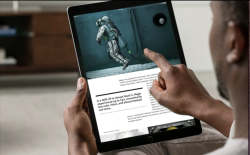 The iPad Pro weighs 725 grams, which is heavier than the previous iPad Air which was just under 450 grams. The Performance does compensate for it though. Technically, iPad Pro has A9X chip, 12.9 inch display, 10 hour battery life, and a four speaker audio system.

But, the real deal of the iPad Pro is the Newly introduced accessories which fascinated many. What would a Desktop Class iPad achieve without some truly fascinating accessories to make working on it more simplified?

Though it is debatable that it’s a Rip-Off of the Microsoft Surface, Apple launched a Stylus and a Cover Keyboard for the iPad Pro. First, let’s have a look at the Stylus. 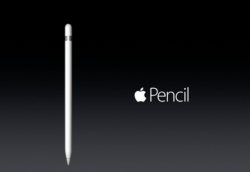 The new iPad Pro can also work with a new physical keyboard. It’s called the Smart Keyboard. The fabric keyboard also serves as a cover for the iPad Pro and it also gives a Laptop kind of Keyboard experience. The iPad Pro has magnetic sensors which provide the Keyboard a port for data and power. That means getting rid of any kind of batteries or Bluetooth connectivity for the Keyboard. 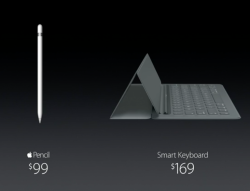 The Question we can ask here is what purpose will the Larger Apple iPad Pro and these Fancy Accessories serve?

With a Huge 12.9” Retina Display and a Powerful Processor. This New iPad could well be the answer for People who wish to replace their Laptops with an iPad. With Desktop Class Performance and productive accessories. This could well be an worth the while to switch to using an iPad as your Daily Driver instead of a Laptop. 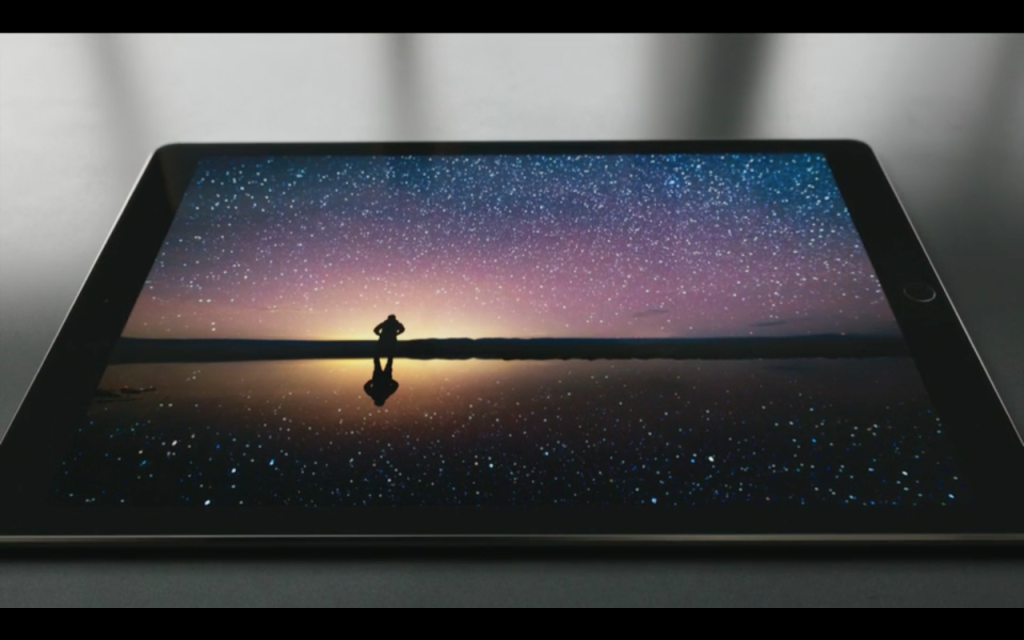 Also, since this iPad Pro will be running iOS 9, it comes with the benefit of Multi-Tasking and Split-Screen Functionality. You now can have to Apps opened side by side and Work on them simultaneously. Very useful if you are Browsing the Internet as well as working on a Document or Email.
Note: iOS 9 will be launching for all Apple iPads and iPhones on September 16. (You can download them via the Software Upgrade) 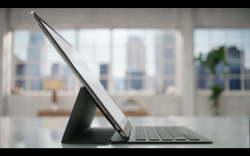 Surprisingly, Microsoft conducted a Demo () to show how effectively The Apple Pencil works with the MS Office Applications. One can use multitasking or Split Screen to open Excel and Word at the same time and Copy Information to and fro. You can draw directly into PowerPoint slides with the Apple Pencil and it would thereby convert it into shapes for professional looking content. 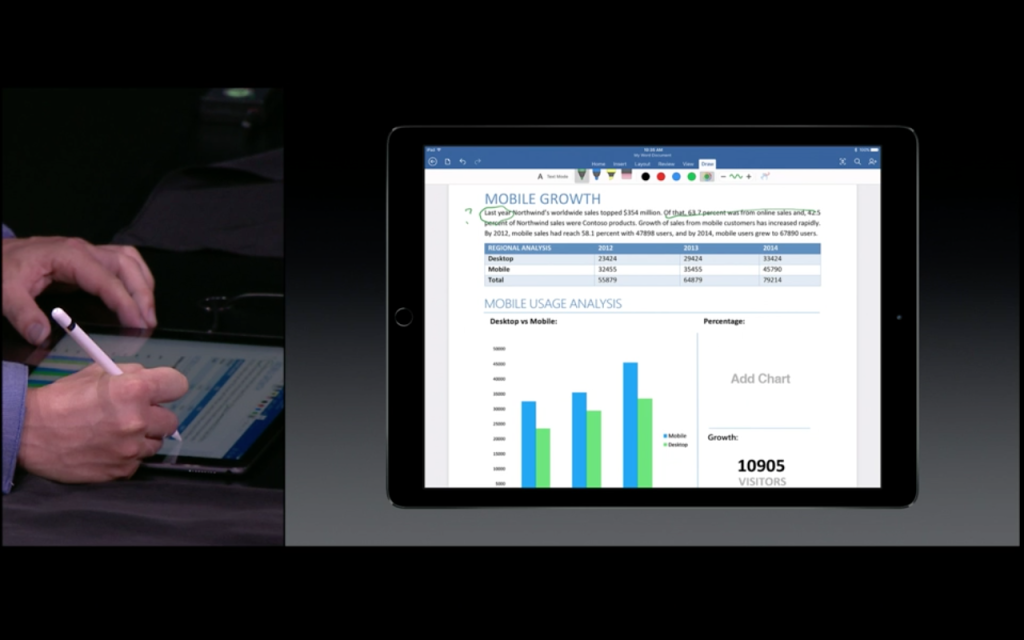 Also announced hastily was the iPad Mini 4. The 7.9” iPad got a slight upgrade from the Previous version.

Regarding Pricing and Availability. 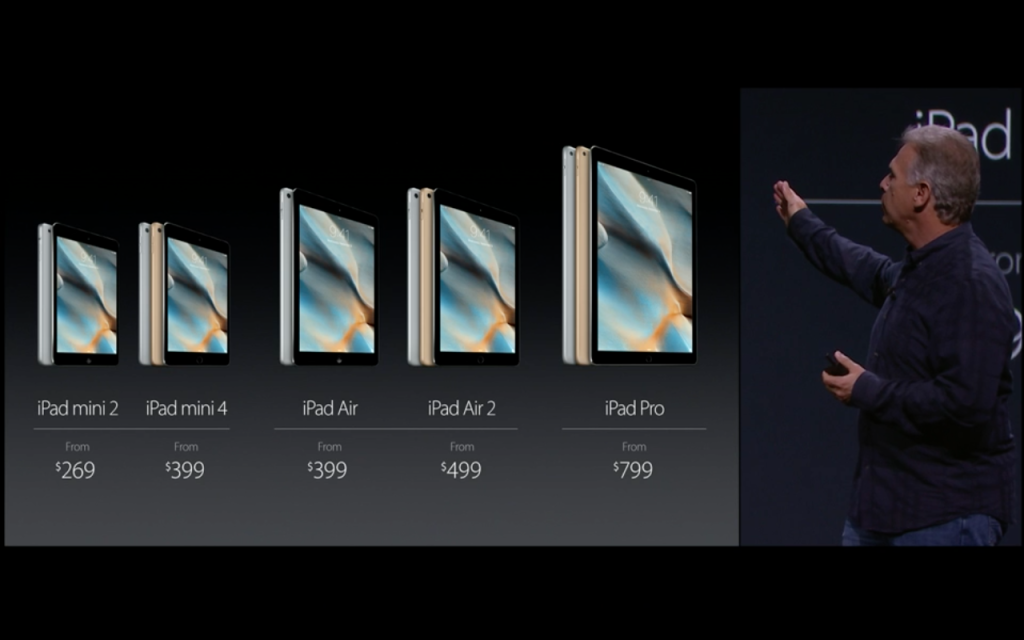 iPad Line Up and Pricing

Stay Tuned to MobileJury.com for the more news & launches about the Apple Event.