Apple has released an important iOS 7.0.6 update for iPhone 4 or higher, Apple iPad 2 or higher and for fifth generation iPod touch. Read the full article to know how this update will make your devices more secure . 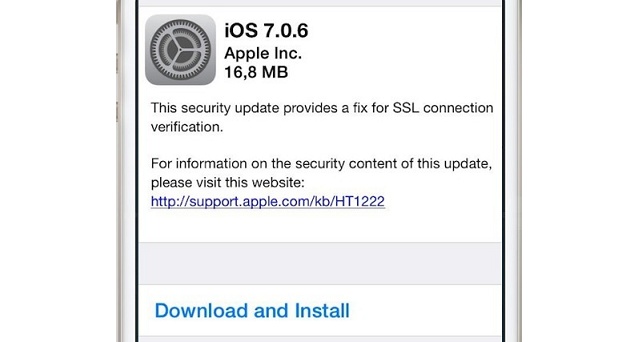 This update is mainly released for fixing a SSL connection verification. This update carries a build number 11b651. This update is available as an OTA (over the air). Size of this update is 35.4 MB on an iPhone 5S. We have gone through various articles of Apple support knowledge base.

The SSL vulnerability in the previous version allowed a hacker to modify or capture the data in so called secure sessions. This hacking was possible only when the user was connected to an insecure wi-fi network.

By the way, the users can download the update by using Wi-Fi connectivity (recommended). Kindly back up your iOS device`s data to iCloud or iTunes before doing any update.  While the fix for Apple iPhone 3GS and Apple iPod touch devices will get iOS 6.1.6 update.

Apple seems to have taken quick action against the problem. Previously Apple had introduced iOS 7.0.4 as a security update. That was for fixing an issue, where a user was able to do in-app purchases with insufficient authorization.

We will keep you informed about any such updates. Till then keep reading MobileJury.

Gionee launches a mid-range budget smartphone as they had promised. But yes they did come up with a huge surprise. They have launched Gionee M2 with a massive battery of…