The so called Indian mobile manufacturing brands Karbonn and Lava soon are going to launch Windows smartphones. Recently they had a Tie-up with Microsoft to get the windows phones licensing. We have a price estimation as per the sources of the upcoming smartphones so let us have a look at them. 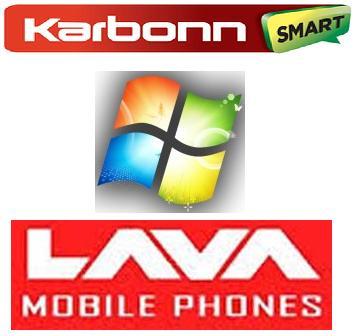 The Karboonn windows phone devices will have a price in the range of Rs.6,000 to Rs.12,000. While Lava windows smartphones will be priced for Rs.6,500 and onwards. Karbonn revealed that 4 windows smartphones in the above mentioned price range will be launched in May end or by June first week.

Also Xolo brand has plans of launching windows phones in the coming quarter. We hope that these brands make some exceptional value for money windows phones. We will keep you updated regarding the same. Till then stay tuned on MobileJury.