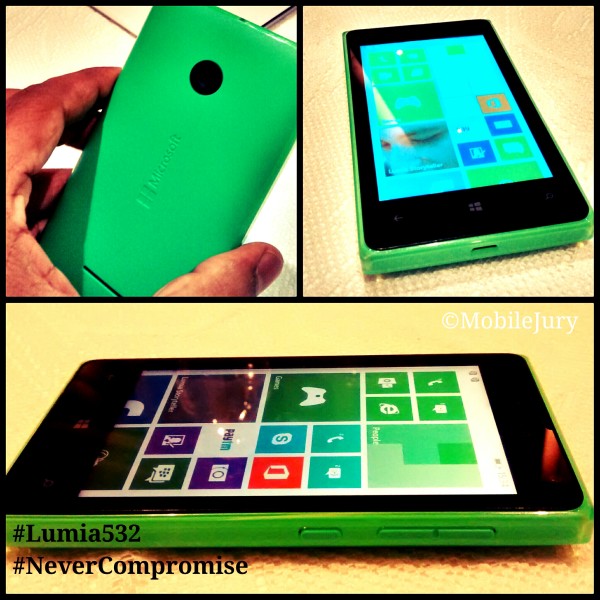 Microsoft announced their Latest phones in the Lumia Segments, The Lumia 532 and Lumia 435. They aim to woo first time smartphone buyers and have priced the phone at a budget level. 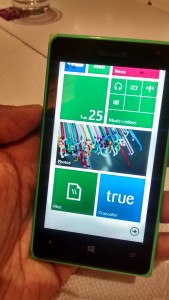 The phone has a 4-inch 800 × 480 display and boosts decent hardware with Qualcomm’s Snapdragon 200 CPU and a 1.2GHz quad-core processor along with 1GB RAM for efficient multitasking. It does have a regular fixed focus 5MP rear camera and a fuzzy 0.3 MP front camera. The phone runs on the Latest Windows 8.1 with the Lumia Denim update coming end of Feb 2015. In the case of Storage, one will get 8 GB of Internal Storage as well as an option to expand to a massive 128GB of storage using the microSD slot. A  1560mAh Battery powers on the phone.

On the First Look, the Phone has a great build quality with changeable back panel shells available in Bright Green, Bright Orange, White and Black which make sure the phone has a personalized feel. The phone has a good outward finish which makes it easy to hold. It also looks like the Typical Nokia build which should be durable in nature. 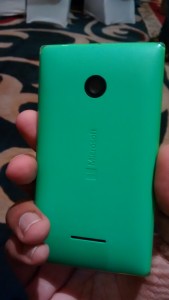 The phone has a standard fixed focus 5MP Camera. The camera could be a low point in this phone with sub par pictures, but I don’t think one can expect any better in this price bracket. The front camera isn’t at all up to the mark tho, with selfies slightly pixelated.

The phone runs the latest Windows 8.1 and will be getting the Denim update this month it self. Microsoft stressed that the Operating System will be one of its major selling points. With the seamless integration of Office and Skype the phone runs well. The navigation on the Windows OS was smooth.

Also launched at a slightly lower price than the above phone was the Lumia 435. It features identical specification and features. Only here the camera is down one more notch featuring a paltry 2MP rear camera and once again a VGA front camera.

These phones have good hardware and excellent software with the Windows 8.1 OS. Also with MS Office and other exclusive features like the Rs. 750 cash back from PayTM on recharges. Also several handy offers from Red Bus, 6 months of Truecaller Premium subscription free and 500 MB (x 2) of 3G data for 2 months for Airtel customers.

This phone will be best for first time smartphone buyers as well as those who are looking for a different and better experience to the usual Android.