Sony has announced that they will not provide any further support to their Xperia phones launched in 2012. Well the decision for Sony for few phones like Xperia T, TX and V is still pending. So it is for sure that the other xperia 2012 phones will not receive any further updates. 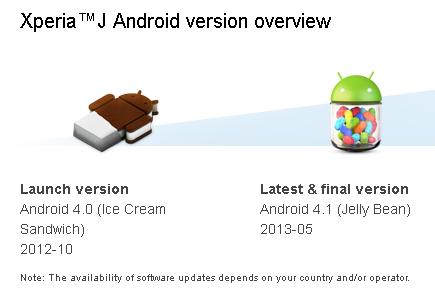 Sony seems to have started updating their support web pages for various phones. Many phones have ice cream sandwich or the jelly bean as their “latest and final version”. This means that Sony will not provide any further updates to these phones.

But well there is a ray of hope for the Sony Xperia T users. The company depicts that the Android 4.4 Kitkat version is “under investigation”. So still it is unsure whether these phones will get kitkat update, but there seems to be a possibility.

Sony already shown in their web pages that these phones will be stuck in their latest OS.

Phones with Android 4.1 Jelly Bean will be the last updated OS for:

Well we believe that every phone has a lifetime. But if the phone has a company`s support for a longer time, the more trust is built with the customer. Sony seems to be slowly loosing heart of many of these xperia users.

Still we hope that the phones which are under investigation: Xperia T, Xperia TX and Xperia V get the kitkat update. Do express your thoughts about this in the below comments.

It is a time of teasers now for Indian manufacturers too. Recently Micromax had teased about the Micromax Doodle 3 in the TV ads and then launched the phone. The…