Finally Xolo has launched the most awaited lightest windows phone. Few days ago we were talking about this phone and now it gets launched for a price of Rs.9,999. So let us see the features of this smartphone. 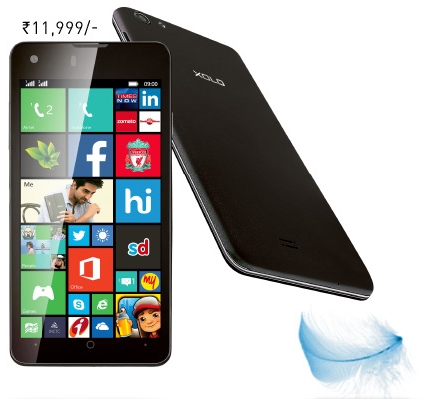 Now there are many smartphones which are getting launched for Rs.9,999. The understanding is that it is still below Rs.10K for the buyer. Surprisingly Xolo has kept a limited offer for which only the first 5,000 handsets will be priced at Rs.9,999. Later on the price will be increased to Rs.11,999.
I think this is a new marketing strategy adopted by the company. They want to sell the smartphones fast. People get a perception that it is available for 2,000 less than what it will be after few days. This smartphone will be released in the 2nd week of July.
Still the weight of the handset is 100 grams and yet it is known as the lightest windows phone as claimed by the brand. The rear camera has a PureCel sensor with LED flash support. Right now this handset can be pre-booked from Snapdeal at a price of Rs.9,999.
I do think that features wise Xolo Win smartphones does look better than the Micromax Win smartphones. We will keep you updated about such phone launches. Till then stay tuned on MobileJury.

The Indian smartphone manufacturer Micromax has launched a new CDMA+GSM smartphone. This smartphone was awaited from a long time. Finally it gets launched for Rs.9,999. Micromax Canvas Duet AE90 Specifications…