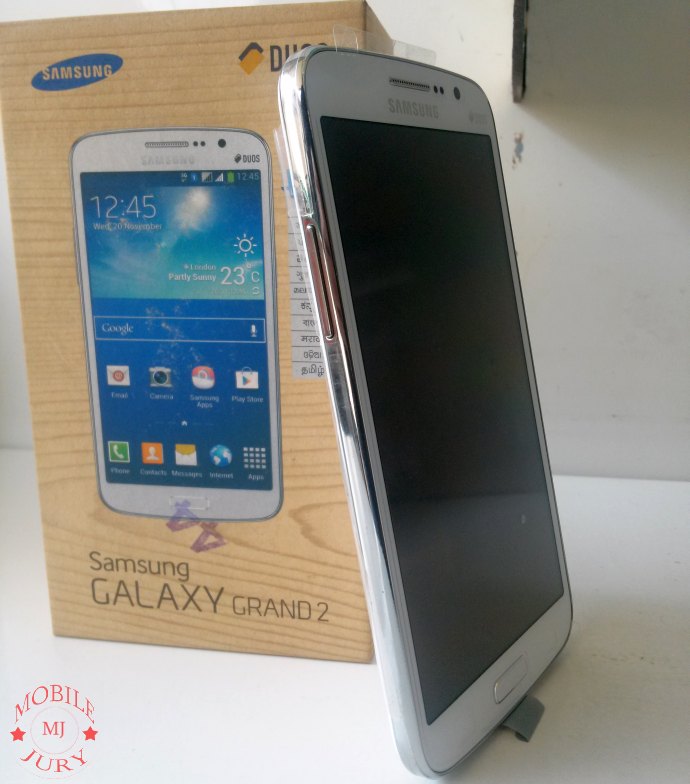 The full review will be published as soon as we get our hands on the retail unit. Till then you can use this quick review as a reference for selecting/comparing it with other phones within the same price segment.

As of now the Galaxy Grand 2 bears a price tag of ₹21,500 online making it a contender among the year old flagships from various manufacturers. It runs on Android 4.3 Jelly Bean and will hopefully receive the latest Android KitKat (v4.4) update soon.

Just like the Galaxy Note 3, Galaxy Grand 2 also features the faux-leather back panel but this one looks more like plastic than leather. A wide chrome bezel runs along the periphery of the phone flanking the volume rocker on the left and power button on the right. 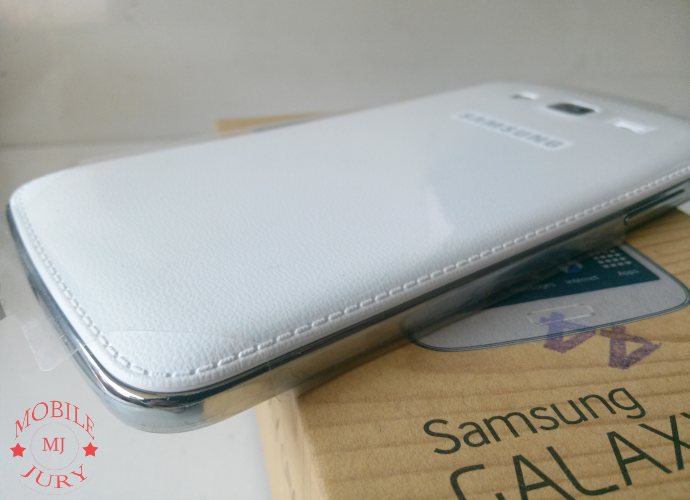 The bottom side bears the micro USB v2.0 slot and a microphone slot while the top bears the 3.5 mm earphone jack.

The backpanel features an LED flash, 8MP sensor and the loudspeaker grill respectively at the top-centre portion. The proximity sensors and the 1.9MP front camera are located on the front side at top just right to the earpiece grille.

The exclusion of a secondary mic for noise cancellation comes as a surprise at this price point.

The Snapdragon 400 chipset in the Grand 2 is same as the one found in Moto G. It is also faster than the older MediaTek MT6589 chipset found in many mid-range phones of various local manufacturers.

The 1.2 GHz quad-core processor along with Adreno 305 GPU is more than capable of running games like Asphalt 8 and Modern Combat 4 etc.

PS: Don’t expect top notch performance while playing the high-end games in high settings. After all the chip manufacturers do not make the premium chips like Snapdragon 805 for nothing. 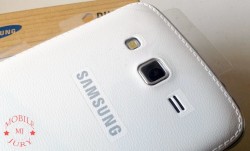 The Galaxy Grand 2 comes with the same 8MP snapper as found in its predecessor. The 1.9MP camera on the front side is in charge for your video chatting needs.

We can’t comment on the camera quality as of now but expect it to expect better than the one found in original Galaxy Grand.

And… please don’t compare it with the 8MP shooters found in the local branded phones.

This phablet is made for those who want a phone with a big & beautiful display but cannot shell out a premium amount for it. The Grand Duos was designed keeping only the big screen size in mind and Samsung probably cut down on the resolution for sake of cost cutting.

We didn’t like the display of the Grand Duos even a bit. It looked dull and grainy.

Samsung has learnt a lesson now and the Grand 2 features an HD display. While the display is based on TFT LCD tech. it should look good. Don’t forget that displays on Samsung phones render saturated colors which pleases the masses.

This TFT display has a pixel density of 280 ppi approx. making the images and text look sharp.

The Samsung Grand 2 comes with an improved battery of 2600 mAh. This should easily make the phone last a full day of light to moderate usage including short gaming sessions.

The phone will easily last a full day of moderate usage.

I’ll just keep it short and simple. Buy this phone if you are looking for a branded dual-SIM mid-range phone having a large and beautiful display with good battery backup.

If you are after gaming, latest OS updates and don’t care much about the camera then Moto G is worth an option.

Sound off your thoughts and opinions about the phone in the comments below.

Spice mobile has announced a very interesting online campaign. It is called “Spice Milaye Sapnon Se”. This is an online contest where people will be able to share their dreams….